The Wayne Lab was awarded three grants from the California Conservation Genomics Project (CCGP) to study species important to California: Yuma myotis, bobcat, and three species of scrub jays. These projects are a unique opportunity to apply genomic tec

END_OF_DOCUMENT_TOKEN_TO_BE_REPLACED

The Wayne Lab was awarded three grants from the California Conservation Genomics Project (CCGP) to study species important to California: Yuma myotis, bobcat, and three species of scrub jays. These projects are a unique opportunity to apply genomic techniques to better understand how to manage wildlife populations during climate change while solving California’s most important conservation problems. The project has four components: Component 1 produces a reference genome for approximately 150 endangered, threatened, and/or ecologically important species. Component 2 assembles a geographically representative set of samples for each of these species with broad, range-wide coverage, followed by whole genome resequencing of all samples. Component 3 brings in climate data, satellite imagery, and geospatial mapping to integrate genomic and environmental data to produce landscape genomic maps. Component 4 focuses on communication of our results and sharing of knowledge with state agency partners and collaborators.

Ultimately, the Wayne lab will be responsible for producing samples for one high coverage reference genome and 100-150 re-sequenced genomes for each project. To learn more about each project see below.

About the Species: Yuma myotis are a widely distributed and common bat across California.  Currently, 6 distinct subspecies of Yuma myotis exist across their distributional range, 4 of which occur in California. This bat species is closely tied to riparian zones where it forages by capturing flying insects over water.  Further, Yuma bats are known to be robust in their choice of roosting habitat, as they occupy a variety of manmade and natural roost types.

Significance to CCGP: The extent to which MYYU populations are genetically structured, locally adapted, and possess unique functional genomic variation is currently unknown.  Further, Yuma myotis bats are known to be susceptible to white nose syndrome (a disease caused by the fungus Pseudogymnoascus destructans) and landscape genomic data can be used to predict the spread of the disease through California. 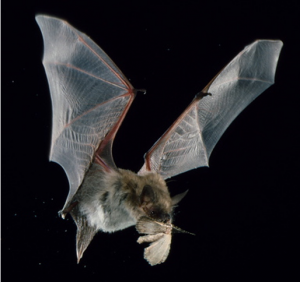 About the species: The bobcat (Lynx rufus) is a medium-sized carnivore well adapted to a variety of environments and is an important landscape species for conservation planning. They occur throughout the United States with an estimated population size of two to three million individuals. Bobcats are largely carnivorous, consuming mainly lagomorphs and rodents. They prefer large areas of rocky terrain in brushy forest or chaparral but are also habitat generalists that could persist in anthropogenically altered areas.

Significance to CCGP: Bobcats are good candidates for CCGP because of their widespread distribution and central role in the food web. They are also considered umbrella species for conserving diverse ecological communities. Understanding their genomic diversity could help us establish management units for bobcats across California and identify the genetic diversity hotspots of high conservation concern. 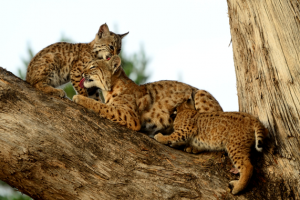 Island Scrub-jay (Aphelocoma insularis): Island Scrub-jay is a distinct species from the mainland scrub-jays. The Island Scrub-jay is noticeably larger in body size, beak size, and talon size as well as blue-r in appearance than other jays. This species is only found on Santa Cruz Island making it a species of high conservation concern to the state of California.

Significance to CCGP: It is necessary to sequence genomes of all the scrub-jays found in the state of California. This approach will allow us to address hybridization events, explore evolutionary histories, and determine population structure among the Island Scrub-jay (if any), the Western Scrub-jay, and Woodhouse’s Scrub-jay. To date there are no management efforts that directly target scrub-jays. But we suspect this will change because scrub-jay habitats are threatened by loss of oaks by human induced activities and sudden oak death. As anthropogenic actions and the sudden oak death pathogen spreads, management and conservation efforts will be necessary. This project will directly address threats and provide genetic data for a rational management of mainland and island jays. 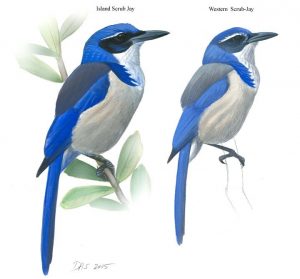